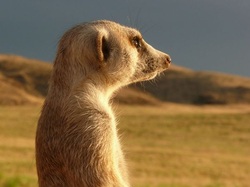 Ethology is the scientific and objective study of animal behaviour, and is a sub-topic of zoology. The focus of ethology is on animal behaviour under natural conditions, as opposed to behaviourism, which focuses on behavioural response studies in a laboratory setting.
Cognition is the mental process of knowing and includes awareness, judgement, perception and reasoning.

Many naturalists have studied aspects of animal behaviour throughout history. The modern discipline of ethology is generally considered to have begun during the 1930s with the work of Dutch biologist Nikolas Tinbergen and by Austrian biologists Konrad Lorenz and Karl von Frisch, joint winners of the 1973 Nobel Prize in Physiology or Medicine. Ethology is a combination of laboratory and field science, with a strong relation to certain other disciplines such as neuroanatomy, ecology, and evolution. Ethologists are typically interested in a behavioural process rather than in a particular animal group, and often study one type of behaviour, such as aggression, in a number of unrelated animals.

The desire to understand animals has made ethology a rapidly growing field. Since the turn of the 21st century, many aspects of animal communication, animal emotions, animal culture, learning, and even sexual conduct that experts long thought they understood, have been re-examined, and new conclusions reached. New fields have developed, such as neuroethology. 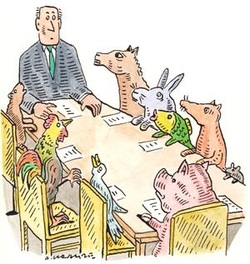 The Cambridge Declaration on Consciousness
On this day of July 7, 2012, a prominent international group of cognitive neuroscientists, neuropharmacologists, neurophysiologists, neuroanatomists and computational neuroscientists gathered at The University of Cambridge to reassess the neurobiological substrates of conscious experience and related behaviours in human and non-human animals.

While comparative research on this topic is naturally hampered by the inability of non-human animals, and often humans,to clearly and readily communicate about their internal states, the following observations can be stated unequivocally: The field of Consciousness research is rapidly evolving. Abundant new techniques and strategies for human and non-human animal research have been developed. Consequently, more data is becoming readily available, and this calls for a periodic re-evaluation of previously held preconceptions in this field.

Studies of non-human animals have shown that homologous brain circuits correlated with conscious experience and perception can be selectively facilitated and disrupted to assess whether they are in fact necessary for those experiences. Moreover, in humans, new non-invasive techniques are readily available to survey the correlates of consciousness. The neural substrates of emotions do not appear to be confined to cortical structures. In fact, subcortical neural networks aroused during affective states in humans are also critically important for generating emotional behaviors in animals. Artificial arousal of the same brain regions generates corresponding behavior and feeling states in both humans and non-human animals.

​Wherever in the brain one evokes instinctual emotional behaviors in non-human animals, many of the ensuing behaviours are consistent with experienced feeling states, including those internal states that are rewarding and punishing. Deep brain stimulation of these systems in humans can also generate similar affective states. Systems associated with affect are concentrated in subcortical regions where neural homologies abound. Young human and non-human animals without neocortices retain these brain-mind functions. Furthermore, neural circuits supporting behavioral/electrophysiological states of attentiveness, sleep and decision making appear to have arisen in evolution as early as the invertebrate radiation, being evident in insects and cephalopod mollusks (e.g., octopus). Birds appear to offer, in their behavior, neurophysiology,and neuroanatomy a striking case of parallel evolution of consciousness. Evidence of near human-like levels of consciousness has been most dramatically observed in African grey parrots.

Mammalian and avian emotional networks and cognitive microcircuitries appear to be far more homologous than previously thought. Moreover, certain species of birds have been found to exhibit neural sleep patterns similar to those of mammals, including REM sleep and, as was demonstrated in zebra finches, neuro-physiological patterns, previously thought to require a mammalian neocortex. Magpies in particular have been shown to exhibit striking similarities to humans, great apes, dolphins,and elephants in studies of mirror self-recognition. In humans, the effect of certain hallucinogens appears to be associated with a disruption in cortical feed forward and feedback processing. Pharmacological interventions in non-human animals with compounds known to affect conscious behavior in humans can lead to similar perturbations in behavior in non-human animals. In humans, there is evidence to suggest that awareness is correlated with cortical activity, which does not exclude possible contributions by sub-corticalor early cortical processing, as in visual awareness.

Evidence that human and non-human animal emotional feelings arise from homologous sub-cortical brain networks provide compelling evidence for evolutionarily shared primal affective qualia.We declare the following: “The absence of a neocortex does not appear to preclude an organism from experiencing affective states. Convergent evidence indicates that non-human animals have the neuro-anatomical, neuro-chemical,and neuro-physiological substrates of conscious states along with the capacity to exhibit intentional behaviours. Consequently, the weight of evidence indicates that humans are not unique in possessing the neurological substrates that generate consciousness. Non-human animals, including all mammals and birds, and many other creatures, including octopuses, also possess these neurological substrates.”

*The Cambridge Declaration on Consciousness was written by Philip Low and edited by Jaak Panksepp, Diana Reiss, David Edelman,Bruno Van Swinderen, Philip Low and Christof Koch. The Declaration was publicly proclaimed in Cambridge, UK, on July 7, 2012, at the Francis Crick Memorial Conference on Consciousness in Human and non-Human Animals, at Churchill College, University of Cambridge, by Low, Edelman and Koch. The Declaration was signed by the conference participants that very evening, in the presence of Stephen Hawking, in the Balfour Room at the Hotel du Vinin Cambridge, UK.