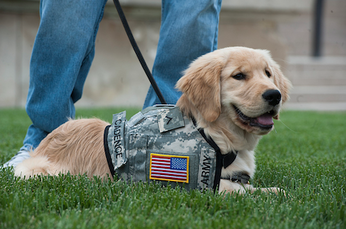 Many animals enjoy work, in fact studies have shown when given a choice, animals would rather work for a reward (like food) then get one for free. This phenomenon is called contra-freeloading and it is one of the underlying concepts behind training animals to help us. Some species have a better work ethic than others. Cats that were trained by American soldiers during the Vietnam war were supposed to lead soldiers through the thick jungles at night using their amazing night vision and stealthy approach, however the cats, once on the mission, all ran off to explore, sharpen their claws and go hunting! Dogs generally take a different approach, preferring to work co-operatively rather than in isolation and as such, are the number one species for a wide and ever-increasing range of animal careers.

Traditionally of course, horses, donkeys and mules were the predominant working animals and in many countries this is still the case where they pull carts and wagons, carry heavy loads and till farmland. Nowadays in developed countries, horses are usually given jobs in the police forces and ceremonial military duties but some work as therapy animals, visiting the sick and elderly or being used to help teach mentally or physically disabled people co-ordination and social skills through riding lessons. Cats were once also official working animals, travelling the high seas as Ship's Cats to catch the on-board population of rats and mice that would pilfer the sailors' rations.

Working directly with working animals is an exciting developing area of Chivalric Ethology, and understanding the issues and ethics of working animals is one of our on-going areas of research and participation. Animal retirement is a relatively new area of welfare concern and compliments the more established questions of how long or hard animals should work for. For example, many dolphins working as therapy animals have very strict regulations ensuring they have plenty of rest, free time and playtime between their more focused sessions with human patients.

Animals on the job